I’ve played more new games this past year than ever before, so with the holidays coming up and the year ending, everyone posting gift guides and such, I wanted to reflect and analyze a bit by making my own favorite game lists. For this post I will focus on my favorite abstract strategy games.

I’ve been playing chess since I was around four years old, but the truth is I never even thought of it as a board game. I could sit down to play a card game, a board game, or chess. Previously having very limited board game knowledge, I had no concept of board game genres, and what defined an “abstract game” as opposed to any other kind. In retrospect that might be because a good portion of my early tabletop gaming was actually abstract games.

People tend to define abstract games as being (usually) for two players, having perfect information, and not having a theme. This definition has been stretched with games like Azul, which is considered an abstract game but is lightly themed, allows up to 4 players, and also has an aspect of randomness. Even an older game like Battleship is lightly themed and doesn’t have perfect information, but can it be defined as anything other than an abstract game? (Mind you, 90% of my battleship experience was on graph paper, so I never even considered it a "board" game.) It doesn’t have characters, battles, cards to collect, things to build, and it doesn’t tell a narrative. Ultimately, the core of a good abstract game is its mechanic, and here are some great examples, in no particular order:

1. Azul – Is it a surprise to anyone who has played Azul that it is on this list? I’d heard so many rave reviews of it and finally made the purchase, and do not regret it one bit. Azul is a tile collecting/pattern-making game with a market mechanic and random drawing of tiles each round. 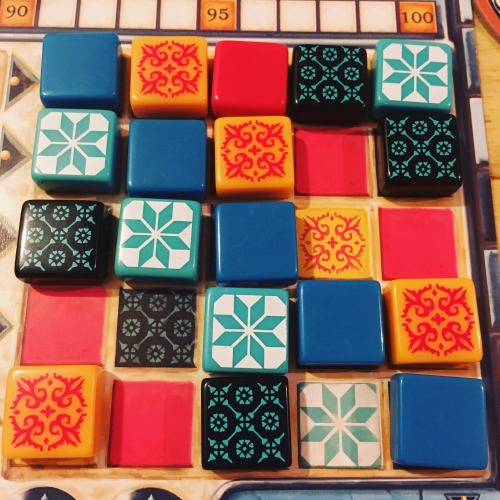 + Easy to learn and easy to teach– great for new gamers, kids, and guests. + Easy set up and easy clean up – it takes about 2 minutes to set up/break down, which removes a barrier to entry when you don’t have the time or energy to sit down for a long game. + It plays pretty quickly once you learn it. + It works well with all player counts – some games that are 2-4 players are either boring with 2 or overwhelming with 4. Azul works well either way. + Very engaging - remains rewarding and interesting even after you’ve played many times. It has an elegant simplicity that still challenges you with various strategies and paths to victory. + It’s pretty, and the tiles are tactile in a very satisfying way.

2. Qwirkle! – This game surprised me quite a bit. I didn’t buy it myself, but ended up playing with my little brothers. Not only were we able to get going in minutes, I was astonished at how effective its simple mechanic was. Qwirkle! Is basically a bag of black tiles, each with one of 8 different shapes in one of 8 different colors. It feels like a cross between dominoes, scrabble, and a Sudoku. 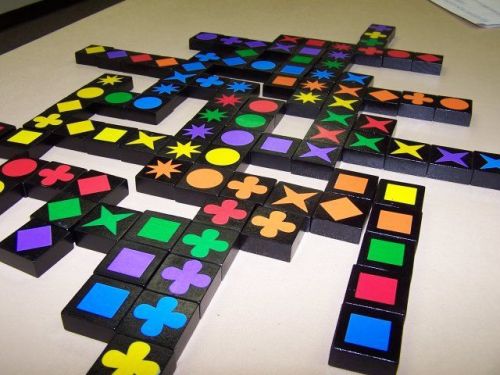 + Easy to learn and easy to teach– the complexity level is about equivalent to dominoes/Sudoku. + No set up needed, clean up is just throwing everything back into a bag. + Plays well with several player counts and a wide age range. +/- It is a bit longer than I expected it to be - I didn’t find it too long, but impatient little ones might start getting distracted. - You have to count up your score every turn and write it down, similarly to scrabble. There’s no way around it, but I don’t love that aspect. + It has a lot of possible strategies and each game turns out different. It feels like a modern classic.

3. Photosynthesis – Beautiful and innovative, Photosynthesis is a competitive game about growing trees, requiring you to plant seeds and nourish them with the light of the sun, which changes its angle each round and eventually gets blocked as trees grow taller. 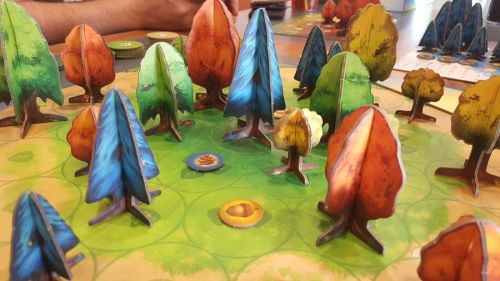 + Beautiful components – nice to look at and pleasant to handle. + It’s about trees! That’s just an automatic plus in my book. + Unique mechanic that reflects the theme well. I commend the designers for their genius here, because it really is something special. - Slightly harder to teach than the other games on this list – not difficult, but I feel like I might have to reference a rulebook once or twice, which is not the case with the others.

4. Blokus – I probably find Blokus extra fun because I just love shapes, but it’s a great little strategy game that has a lot to offer. 4 players each have an assortment of tetris-looking colored pieces of various sizes (measured in squares on a grid) and layouts, and the goal is to be left with the least number of units when the board is full and no more moves can be made. 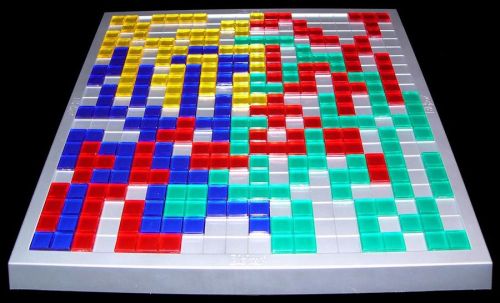 + Easy to learn and easy to teach. Can be played with kids. + The components are satisfying to interact with. + It plays quickly. Another one that is great for a quick sit down, or something you can play with guests.  + Seems simple but there are some clever maneuvers possible.  +/- If you don’t have good spacial skills you might find it more difficult. - You can only really play it properly with 4 people, but getting exactly 4 players is often a challenge. (There is also Blokus Duo, a two player variant.)

5. The Duke – The Duke is kind of like chess on steroids with a velvet bag. It is a 2 player game and is similar to chess in that each player has a set of pieces of with different abilities, and needs to “check mate” the other player by cornering their king (in this case, Duke.) The kicker is that each tile’s ability is drawn on it as a chart, but it is capable of different moves on the opposite side of the tile. Each time you move a tile, you must also flip it, so you have to really start thinking 5 turns ahead. You also only start with 3 tiles on the board, and for the rest of the game may either use your turn to move a tile or draw a new one from your bag to place. 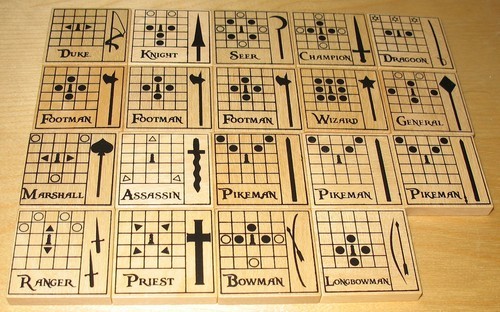 Image by BGG user unic + Get ready for some serious brain-melting strategy. + Its blend of chance and multi-turn planning works well and keeps the game exciting without making it feel unfairly random. + An interesting twist on a classic, therefore also easy to teach, but definitely hard to master. - The game is very different if you are playing for the first time or for the 10th time, so a newbie and a seasoned player would have a fairly imbalanced game. (A big advantage is memorizing the moves that the pieces make on both sides of the tiles, and the more you play, the better you know them.)

6. Quarto! – Stumbled upon this game when a friend was giving it away, and was pleasantly surprised. It’s sort of a 4x4 tic-tac-toe board in which you don’t want to allow your opponent to get 4 in a row… only you choose which pieces they place, and each piece has 4 different characteristics: shape, height, color, and solid/hollow. To get 4 in a row, the pieces only need to share one characteristic between them. 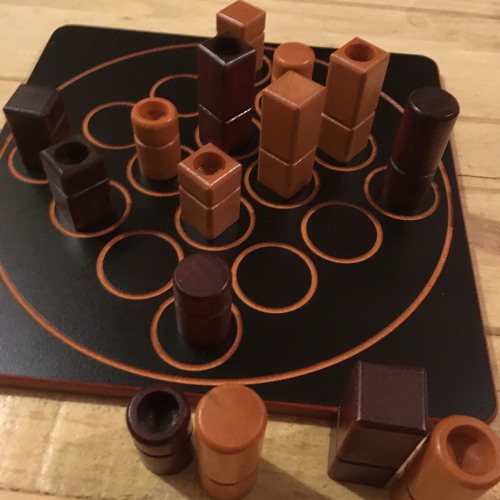 + Easy to learn and easy to teach. Easy set up and easy clean up. + Nice hearty, wooden components with a classic feel.  + You can never tell early on who is going to win. + Unique mechanic where you hand pieces to your opponent to place. - The turn order is hard to get used to and I’m embarrassed to admit how often I forget it in the middle of a game.  -/+ I like to plan ahead and it’s strange to not be able to in this type of game because of the number of unpredictable factors.  - Sometimes you end up at a point where no more moves can be made without the opponent winning (although they also have to realize this, so observation is a key factor here.) 7. Sagrada - This is a 2019 addition to this list that I absolutely had to include. Sagrada is a beautiful and puzzly dice-drafting game about making colorful stained glass windows, inspired by Gaudi's Sagrada Familia Cathedral in Barcelona. It feels good, looks good, and plays well.

+ So many colorful dice. They are a pleasure to play with. The player boards are beautiful too. + You can choose player board of varying difficulty. It's nice to have the variety of puzzly and challenging vs. more casual gameplay. + Plays well with all player counts! It's great with 2-4 or up to 6 if you get the expansion. There is also a solo mode. - The tools and objective cards feel a little repetitive after several plays, and make me wish there were a few more, although I don't necessarily have great ideas for what else could be added. (Worth noting that the box recommends ages 13 and up, but a clever 8 year old can definitely learn this.)

What are your favorite abstract games?